Imagine, for a moment, winding down the day to the sight of a Florida sunset, its reds and golds smearing the sky in a burnished rainbow. It’s about 80ºF and a succession of rolling waves are helping kick up the perfect sea breeze. There’s a frosty margarita in your hand and sand between your toes.

Fresh fish is sizzling on the restaurant’s grill. That whizzing sound signals that juicy citrus and pineapple and mangoes are being blended into the freshest of fruit drinks. Garlic and melted butter are ready to pour onto piping hot blue crab.

Can you smell it? You will. Because this is the dinner scene, every night on Anna Maria Island. A laidback, friendly island where award-winning restaurants sauté, grill, bake and prepare gourmet morsels as unique as our island’s character.

Oh, and have we mentioned? Our Anna Maria Island condo rental is so centrally located, you can walk (or trolley) to any restaurant on the island. So go on, order another glass of wine. Enjoy! 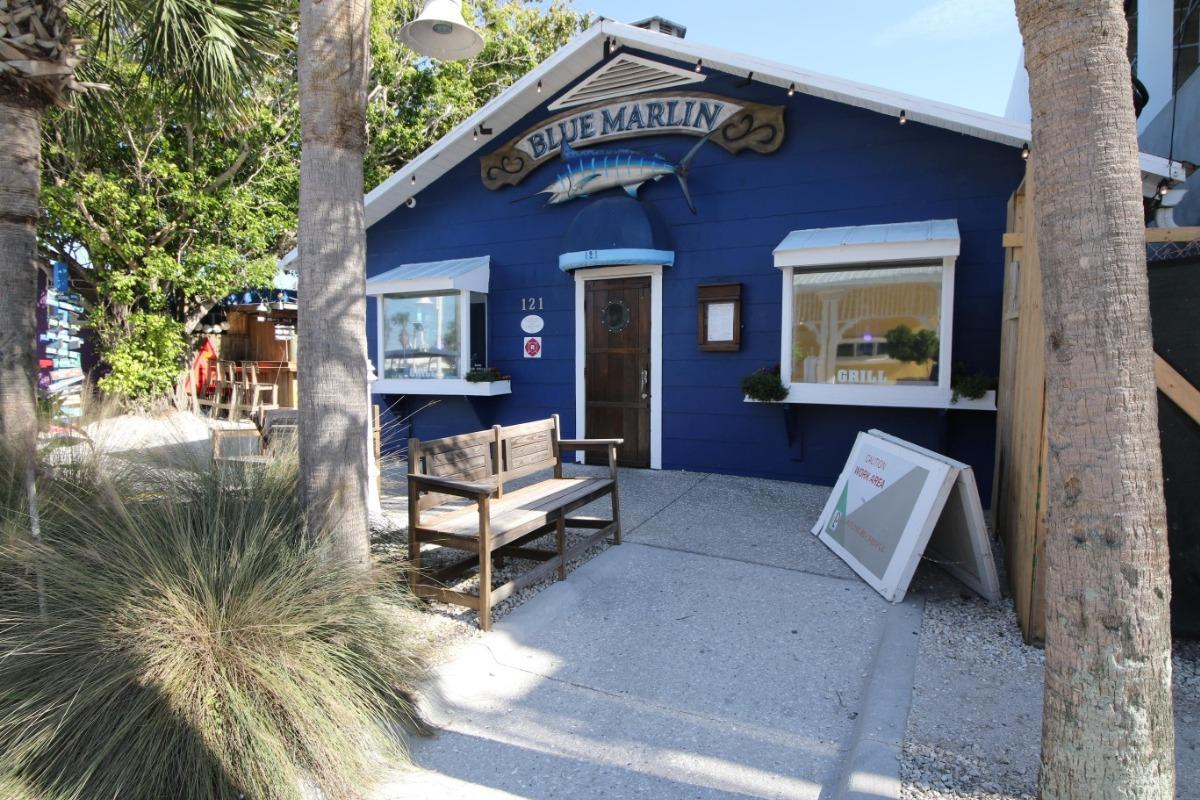 Only locally owned offerings – there are no McDonalds or Starbucks or Burger Kings in sight – dot our tiny paradise, where almost every restaurant offers gulf-front or bay-front seating and sunset (or sunrise!) views. Just think of it as your meal with a (generous) side of delightful scenery – of crashing waves and swooping pelicans and frolicking dolphins.

Of course, Anna Maria Island restaurants are best known – and rightly so – for their fresh seafood. Being right on the Gulf of Mexico, many restaurants have fresh fish daily, such as red snapper, blue crab, mullet and grouper.

When we’re on the island, we like to think of our favorite restaurants in terms closest to farthest – even though the farthest is just a few miles (and a trolley ride) away:

One of the things we love most about our Anna Maria Island condo is its location: Bradenton Beach. Ideally situated near the island’s south-center, we’re in close proximity to, well, everywhere. But even so, we love to frequent several of our closest eateries – Bradenton Beach’s finest restaurants, pizza joints and mom-and-pops.

The Beach House Restaurant is perfect for families, with plenty of room for kids to play on the beach while you enjoy the sunset, a tropical drink and fresh Florida seafood. Both locals and tourists alike enjoy the fine dining, which is served “Florida Style” from the inside dining room or the covered deck right on the white-sand beaches of the Gulf of Mexico. Exceptional local artists perform at the Beach House, assuring that the fabulous seafood won’t be the only thing you’ll be talking about after you leave. 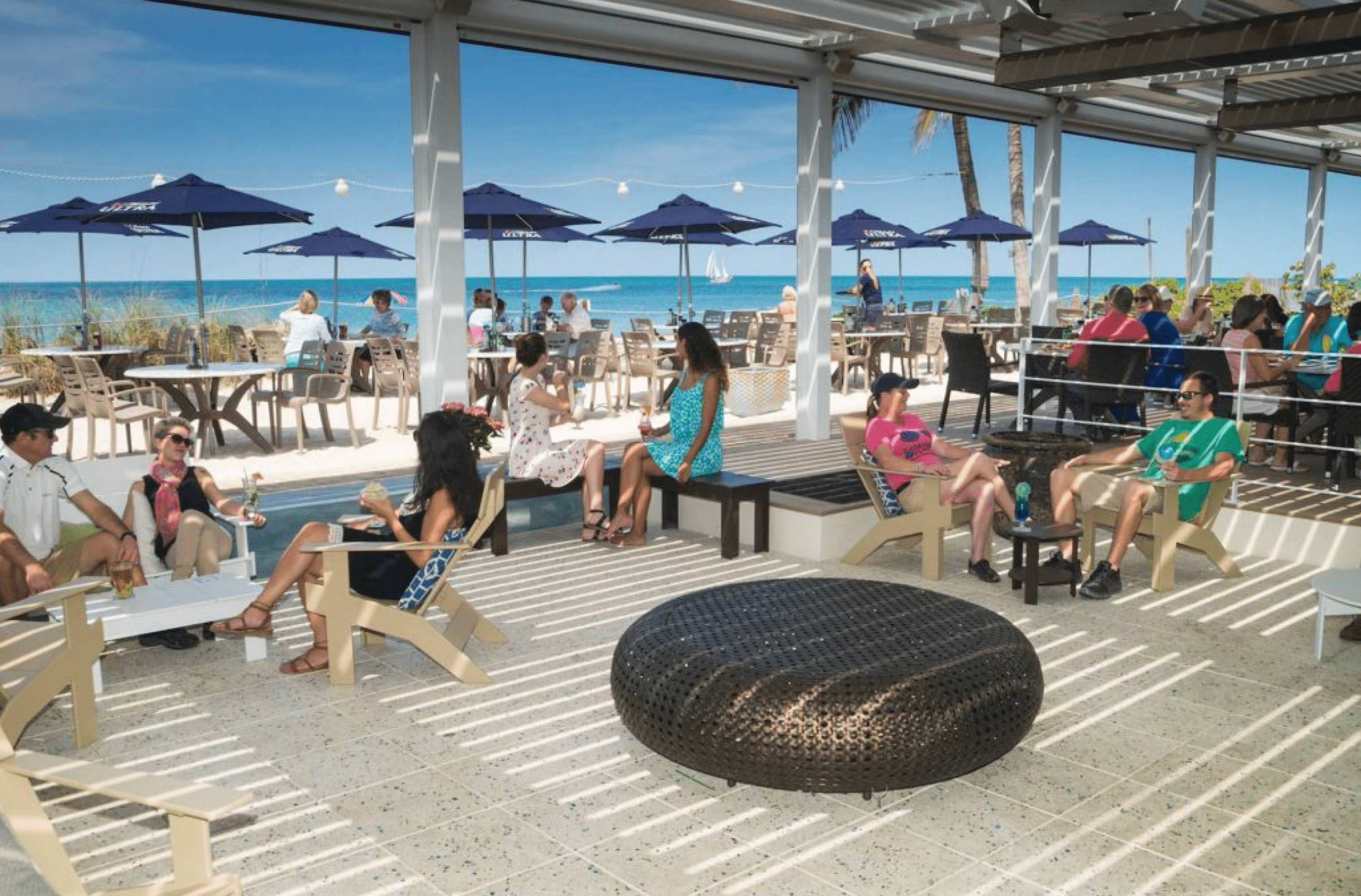 Walking further south of The Beach House you will have the choice of so many of Anna Maria Island’s award winning restaurants, including Omas Pizza, known for the best pizza and Italian food on Anna Maria Island, and The French Quarter, Denzel Washington’s favorite restaurant to eat while on-island.

The Bridge Street Bistro offers spectacular views of the beach and Gulf of Mexico, but what we love most is the choice of dining in the more formal upstairs dining room, or the more casual, outdoor open atmosphere downstairs. The newly opened Anna Maria Island Oyster Bar seafood restaurant, located at the end of the newly built pier on Bridge Street, provides beautiful views of Florida’s Intra-Coastal Waterway and the Bradenton Beach Marina. 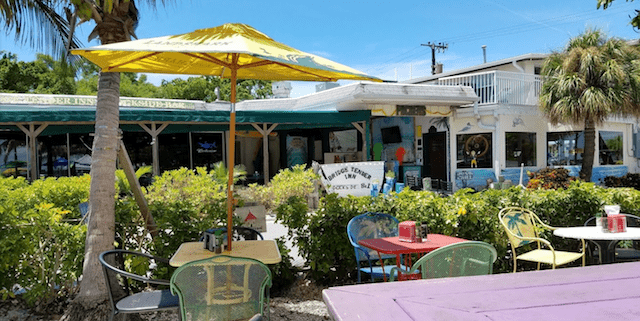 The Bridge Tender Inn provides spectacular water views, stretching to anchored boats and beautiful Sarasota Bay, and sweetens the pot with live music on the outdoor patio. Just a few minutes’ walk north of our Anna Maria Island condo, you’ll also find the newly built Tiki Hut, a fabulous place to enjoy the natural beauty of Anna Maria Island: enjoy spectacular views of the Gulf of Mexico, or walk right up from the beach and enjoy cocktails and dinner while listening to live music. The nearby Gulf Dr. Café is renowned for serving the best breakfast on Anna Maria Island.

Further north of our Anna Maria Island vacation rental condo, you’ll find exquisite restaurants like Sharky’s – the sure giveaway is shark’s head, protruding from the front of the restaurant – and Anna Maria Island’s famous Mr. Bones Restaurant, where you’ll find the island’s best ribs and beverages served from a coffin. (They clearly make no bones about their puns here!)

Holmes Beach is home to many of Anna Maria Island’s great restaurants, including Hurricane Hanks, serving some of the best seafood and Caesar salad in the area. Right across the street from Hurricane Hanks is the Lobster Restaurant, offering over 50 different kinds of martini’s – do you prefer shaken or stirred? – and one of the area’s most unique settings with multiple environments. Fins Bar in the Courtyard offers alfresco dining, while the main restaurant will seduce you with unique wood architecture and accents, as well as polished travertine stone floors.

Without a doubt, the biggest food rivalry on Anna Maria Island is the ongoing burger rivalry between Skinny’s Place, located directly across from the Manatee Public Beach, and Duffy’s, located just a little further north. The truth is they are both wickedly good burgers – thick, juicy and unforgettable. (Do yourself a favour: try both!)

Directly across from Skinny’s sits The Beach Café, which on many evenings offers not only live entertainment but also special buffets at phenomenal prices. Cafe on the Beach serves up breakfast, lunch, and dinner, although the all-you-can-eat breakfast pancake feast, served right on the white-sand beach, is an island favourite.

The most acclaimed restaurant on Anna Maria Island is, of course, Beach Bistro. For more than 26 years, Beach Bistro has been Anna Maria Island’s most romantic fine-dining destination. Located waterfront on the Gulf of Mexico, the restaurant’s scenic backdrop and spectacular sunsets make it the perfect place to celebrate special occasions or simply relax after a long day. 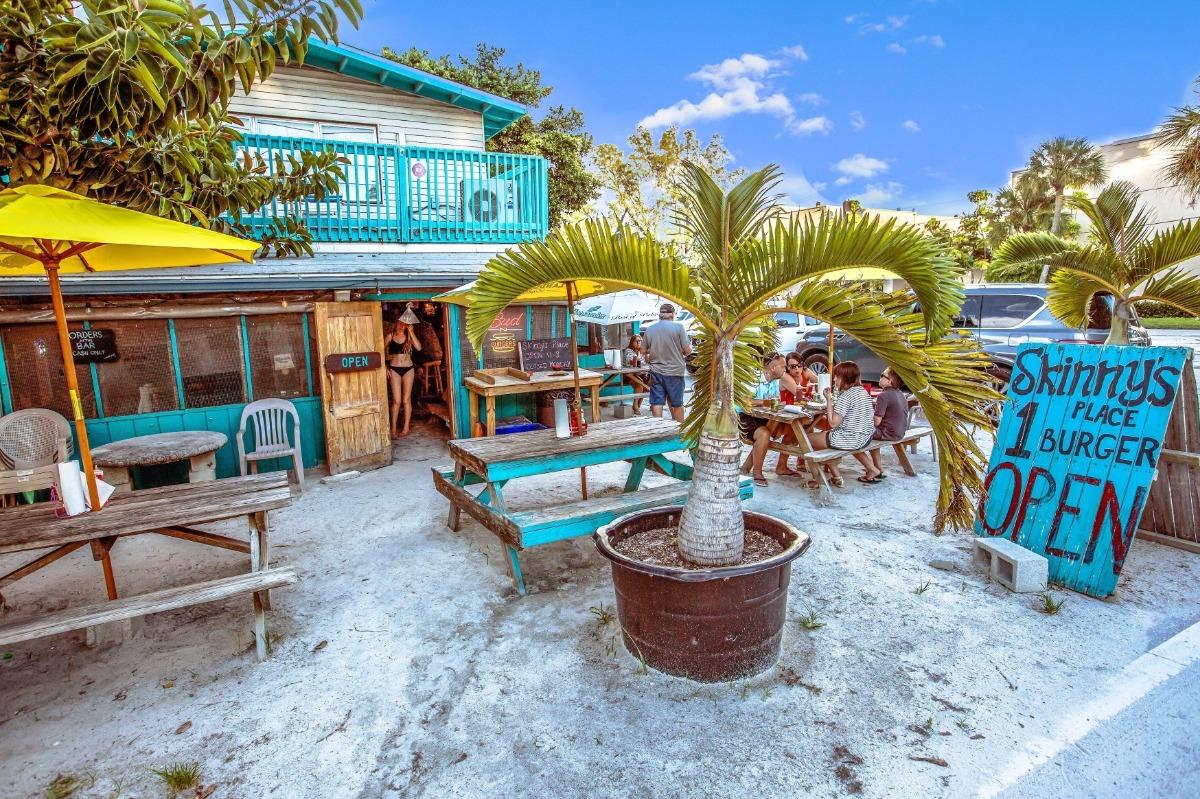 Further north on Anna Maria Island, you’ll find some very different and unique island restaurants, such as The Sign of the Mermaid, which is housed in a cottage built in 1913 and serves award-winning dishes on linen-covered tabletops tucked into intimate little rooms.

Amidst tough competition, the most popular restaurant on Anna Maria Island is the world-famous Sandbar Restaurant. The Sandbar is situated on a large expanse of powder-white sand beach, and offers nearly unimaginable views of the Gulf of Mexico. We think it’s the best spot on Anna Maria Island to watch the sunset and, later, the stars that set the entire night’s sky ablaze.

Bonus: While at the pier, the kids can cast a line while Mom and Dad enjoy a cold brew, and a spectacular view of the nearby Sunshine Skyway bridge, which spans Tampa Bay and connecting St. Petersburg with Terra Ceia. At 29,040 ft. (a little over 5 miles across), it’s the world’s longest bridge with a cable-stayed main span, and is truly a sight to see. Dolphins can also be spotted frolicking around the pylons, which is fun to watch and well worth the stop.

Just north of the City Pier Restaurant, you’ll find what locals call the best restaurant on Anna Maria Island: Situated at the end of a 100-foot pier and jetting out into the water is the Rod & Reel Restaurant. While walking across the pier, you’ll encounter locals and tourists alike, young and old casting their lines into the water and more than happy to strike up a conversation. The restaurant has a cozy bar downstairs, and both indoor and outdoor tables to give you the feeling of sitting in the middle of Florida’s Intra-Coastal Waterway, enjoying some of the best food on Anna Maria Island. 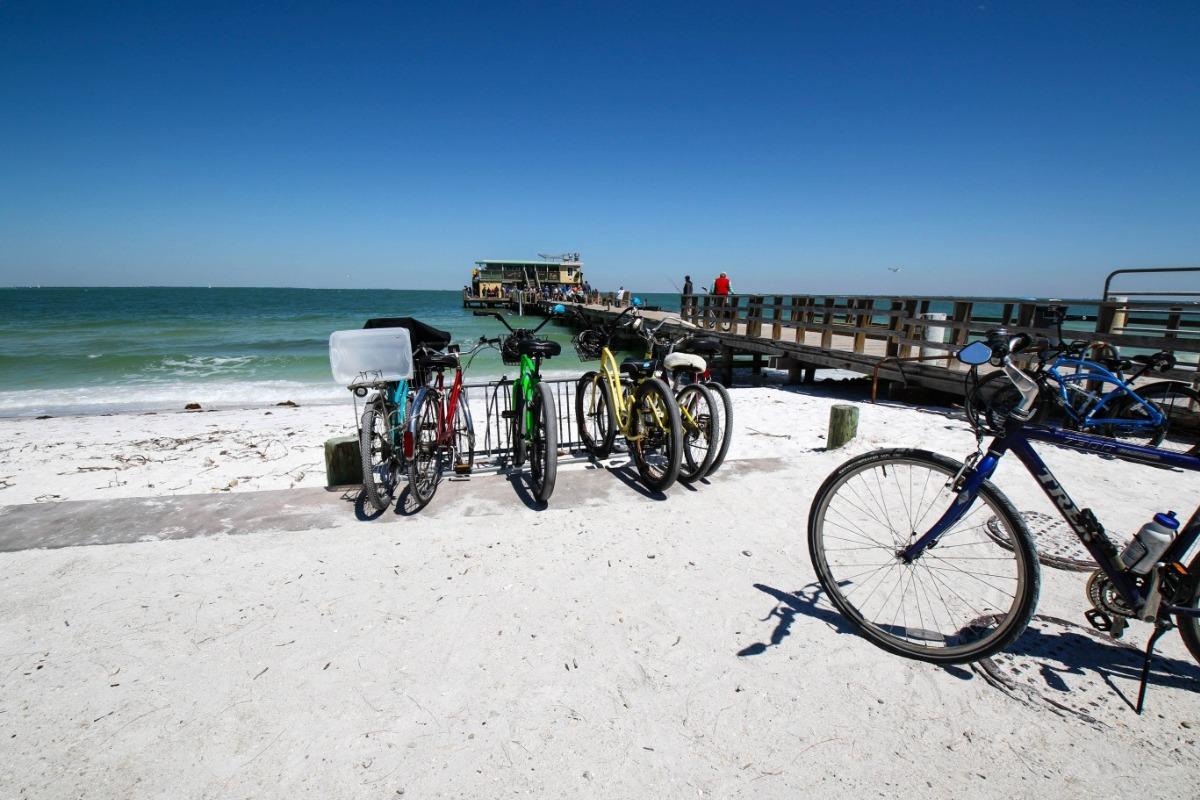 No trip to Anna Maria Island is complete without visiting St. Armand’s Circle, famous for its dining and shopping. You’ll enjoy a scenic drive south along the shores of the Gulf of Mexico before arriving at St. Armand’s Circle, with over 130 shops and restaurants that offer both indoor and outdoor dining, including our favorite, the Columbia Restaurant. St. Armand’s Circle has often been compared to Rodeo Drive in Beverly Hills.

St. Armand’s Circle is only a short walk from Lido Beach, and has shopping and dining options that appeal to all ages. It is especially popular with children (and adults with a sweet tooth), thanks to a prevalence of ice cream shops. You can watch fresh fudge and candy being made there while enjoying a fresh-baked waffle cone, filled to the brim with homemade ice cream. Stroll around the circle and enjoy the marble statues and the world-famous Circus Ring of Fame, where plaques are awarded each year in a ceremony to honor circus greats from around the world.

On the mainland, you’ll find many unique restaurants, as well. Just across the bridge is the distinctive fishing village of Cortez, home to Cortez Kitchen and Star Fish Market, where you can purchase fresh fish, book a fishing charter or hop on a dolphin tour.

Traveling just a little further off the island, you’ll find one of the best seafood restaurants in all of Florida, the Anna Maria Island Oyster Bar. If you’re looking for a terrific Florida seafood restaurant, family dining, and reasonable prices, you’ve found the place! Voted Best All Around Restaurant 2008, 2009 & 2011; Best Seafood Restaurant (8 years in a row!); Best Early Bird Specials (11 years in a row!); Best Margarita; and proud winner of the Manatee Small Business of the Year Award. Also awarded Favorite Seafood Restaurant in the Anna Maria Island Sun’s Readers’ Choice Awards.

When you rent our luxurious Anna Maria Island vacation rentals condo you will receive our Insider Guide, including a personalized list of all our favourite restaurants to eat at on Anna Maria Island and the mainland. 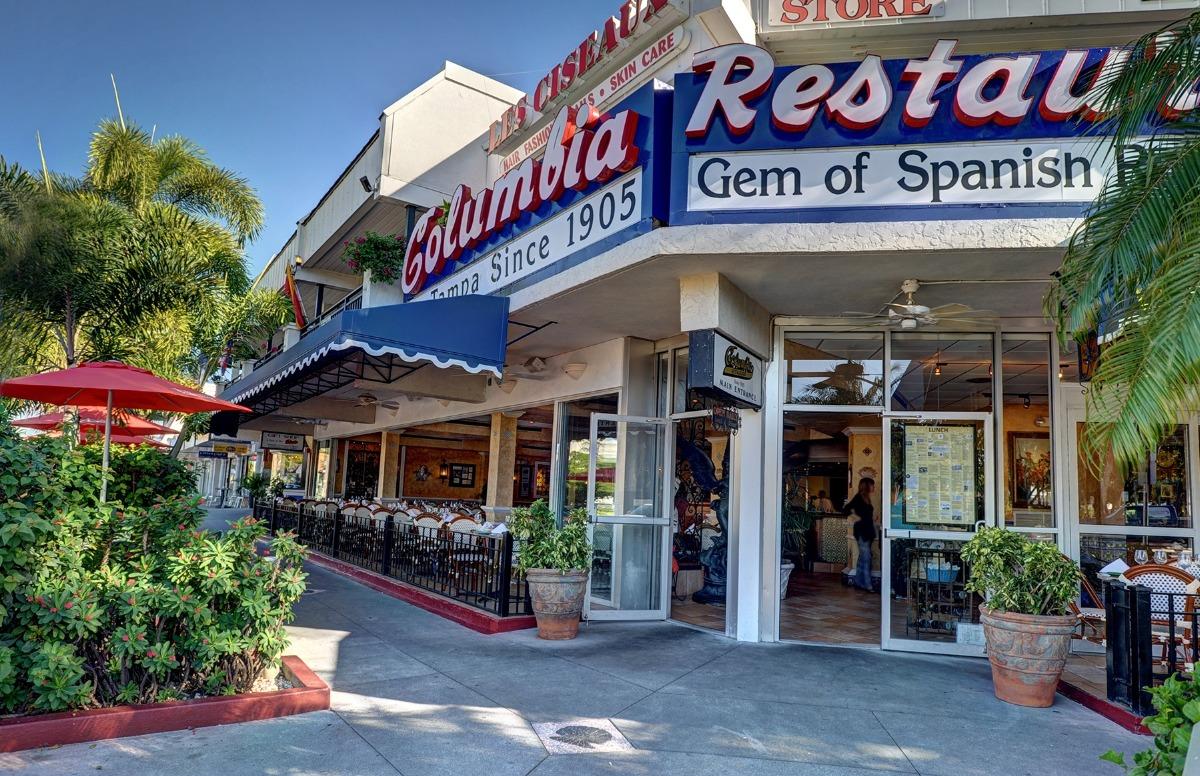